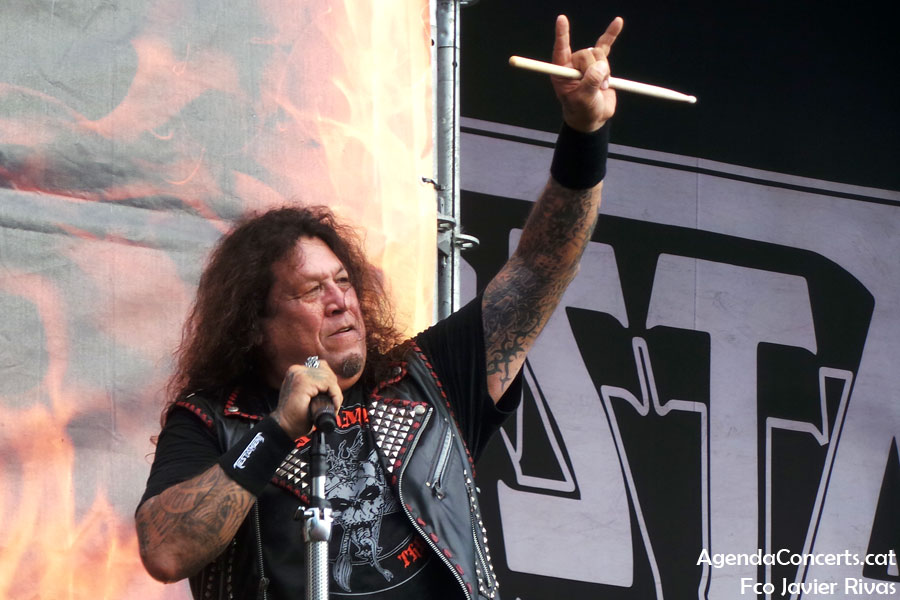 Download and listen the last of Testament: 'Brotherhood of the snake' [CD]

Testament: 'Live at the Fillmore' [Vinyl]

The 2020-02-14 at Turbinenhalle of Oberhausen
More information »

The 2020-02-16 at TivoliVredenburg of Utrecht
More information »

The 2020-03-07 at Manchester Academy of Manchester
More information »

The 2020-03-10 at Ancienne Belgique of Bruxelles
More information »

Testament, one of the titans of thrash metal at the Rock Fest Barcelona<

Thrash has been one of the styles of the metal less represented in the Rock Fest Barcelona 2019 despite its importance in the genre. However, Testament, one of the titans of the Bay Area, has performed on Sunday July 7 in the afternoon at the festival of Santa Coloma de Gramenet.

Captained by the incombustible Chuck Billy, the group has given speed and force to a festival too much hard rock, playing a set list of hits, as is usual at festivals, ideal for headbanging: 'Over the wall', 'Souls of black', 'Practice what you preach', 'Into the pit' ... Also they have played during their concert songs of new album 'Brotherhood of the snake'.

The audience that filled the Can Zam venue has reacted with more than enthusiasm to the songs of Testament and the solos of the guitarplayer Alex Skolnick. To highlight also the important figure that was in charge of the bass, neither more nor less than Steve Di Giorgio from Sadus. On the other guitar, the founder of the group Eric Peterson.

The festival will be held from July 17 to 19 at the Poble Espanyol in Barcelona. Lola Indigo, Alba Reche, Miki NÃºÃ±ez, Oques Grasses, Lildami, Doctor Prats and Itaca Band will also perform.